A vital tool in the production process is MIDI, with it's ability to compose, arrange, and edit musical performances. Whether using Virtual Instruments, or Hardware Synthesizers, one common thing that needs to be done is to Record the sound of these synthesizers as Audio Tracks. Let's take a look at different ways you can do this in Pro Tools.

MIDI is one of the most powerful tools used in modern music production. It essentially serves as digital sheet music that our instrument plugins and external synth modules can read and playback in real time. However, MIDI by itself produces no sound—it requires a virtual instrument, synthesizer, or other piece of MIDI-equipped hardware/software to read the MIDI data and playback sound. When working in Pro Tools, you may want to take an Instrument and/or MIDI track and record them onto an Audio Track. In this tutorial, I will show you a few different ways to accomplish this.

First off, let’s discuss why we might want to record our MIDI data as Audio in the first place. Here is a common scenario: you are collaborating on a music project with other producers and songwriters. As a producer, you have decided to add a few Instrument tracks that feature some of your favorite virtual instrument plug-ins (e.g. Omnisphere, Massive, Spitfire Strings, etc.). However, the producers with whom you are collaborating might not own all the virtual instruments you have used in the session. If they try to playback the Instrument tracks without owning those particular virtual instruments, no sound will playback—as stated above, MIDI itself produces no sound. In this case, you will want to record your Instrument Tracks to Audio Tracks since all computers will be able to playback the audio as it was recorded.

In addition, many virtual instrument plug-ins require lots of processing power. If you have 20+ tracks of high-quality orchestral samples, your computer may begin to struggle during recording and playback. If you record your virtual instruments to Audio Tracks, you will free up your computer’s resources as it will no longer need to be recalling individual samples during playback.

One of the primary ways we can record our MIDI data to an Audio Track is to route the output of our Instrument/MIDI Tracks to the Input of an Audio Track, then record the audio in real-time.

To do this, first create a new Audio Track by navigating to Track > New… or by using the keyboard shortcut Shift+Command+N (Mac) or Shift+Ctrl+N (Windows). Here, I have a stereo Instrument Track that I want to record to an Audio Track, so I’m going to create a stereo Audio Track. I’m going to name it “Piano Print.” Click “Create” to create the new audio track. 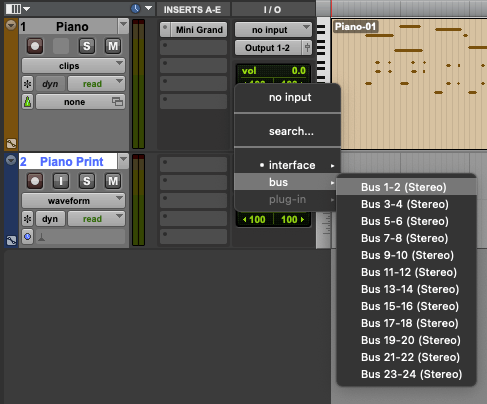 After the Stereo Bus is selected for my Audio Track Input, I’m going to select the exact same Bus for my Instrument Track Output, as shown below. 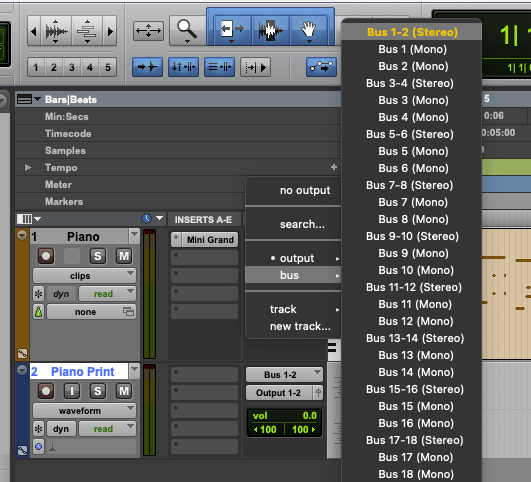 One of the major benefits of recording MIDI to Audio Tracks in this way is that you can record multiple MIDI/Instrument tracks to a single Audio Track or multiple Audio Tracks. For example, in the figure below, you can see that I have added a second Instrument Track, labeled “Pad,” and set its output to Bus 1-2 as well. I then recorded on the Audio Track using the exact same method as above, thus resulting in one audio track that contains the recorded audio data from both the Piano track and Pad track. 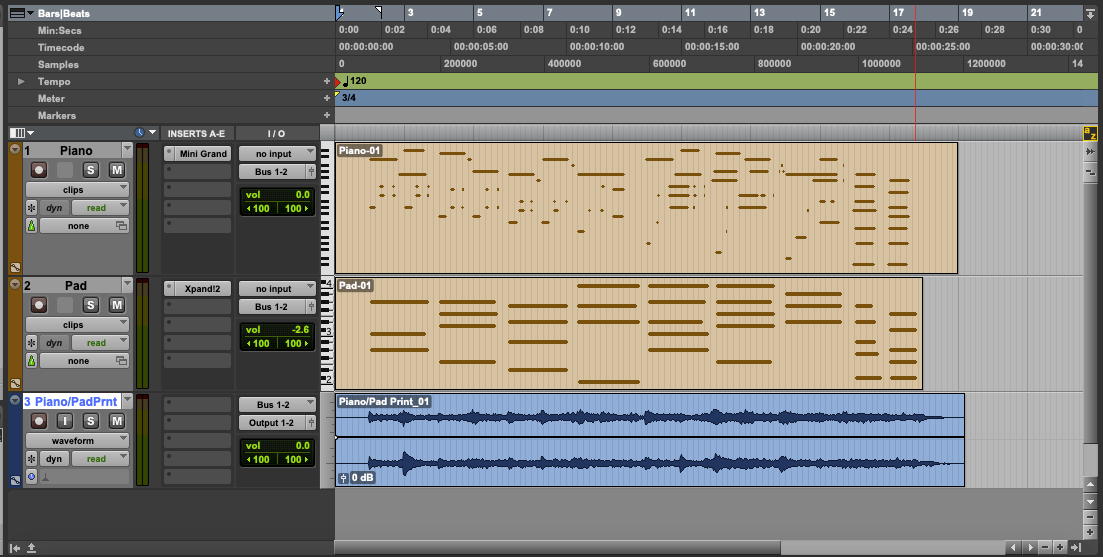 While this method of recording MIDI to Audio Tracks is effective and extremely useful for recording more than one MIDI source, recording playback in real-time is not the fastest method. That’s why Pro Tools also allows methods for offline bouncing as well.

One of the simplest methods to bounce a single Instrument/MIDI Track is to select all the clips you want to record as Audio. Then, using the Grabber Tool, drag the selected MIDI clips to an empty Audio Track. A progress bar will appear, showing the status of the bounce. When finished, the selected clips will be bounced to the Audio Track! 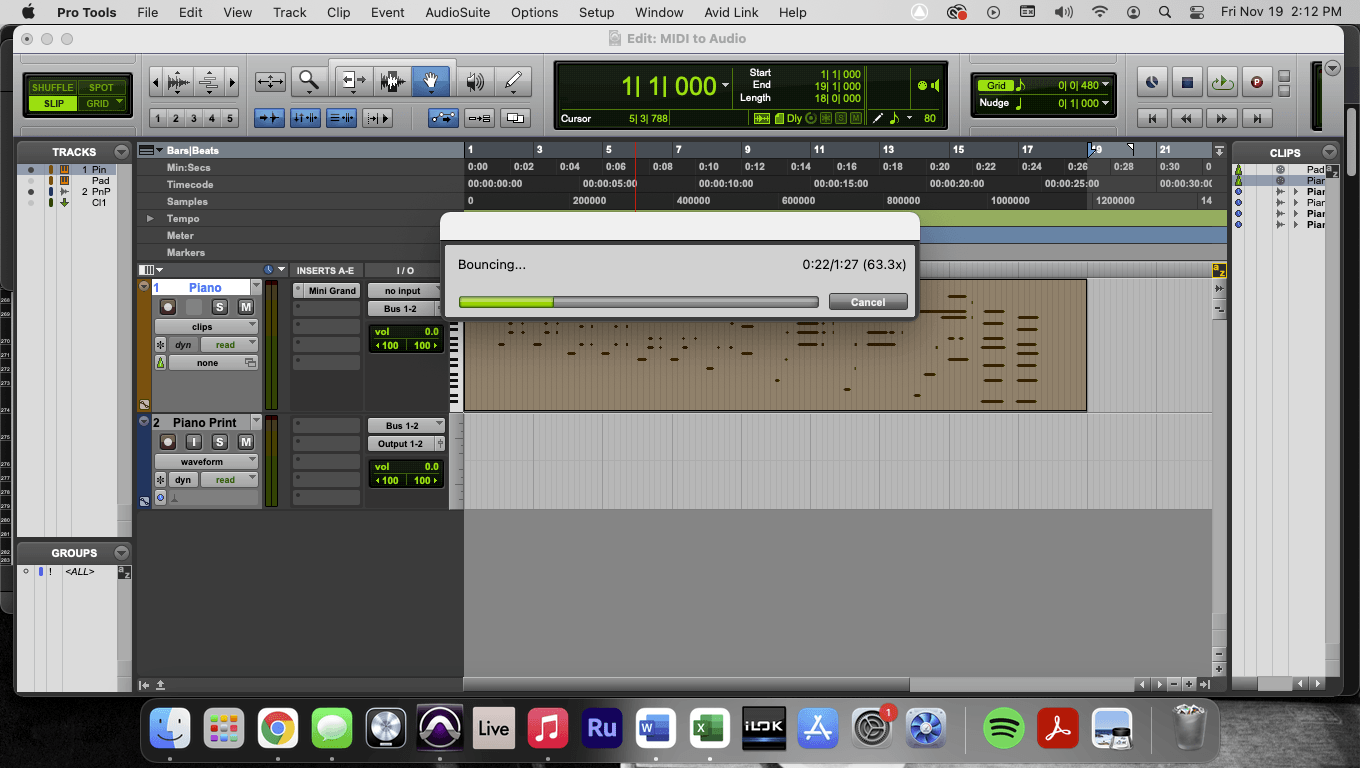 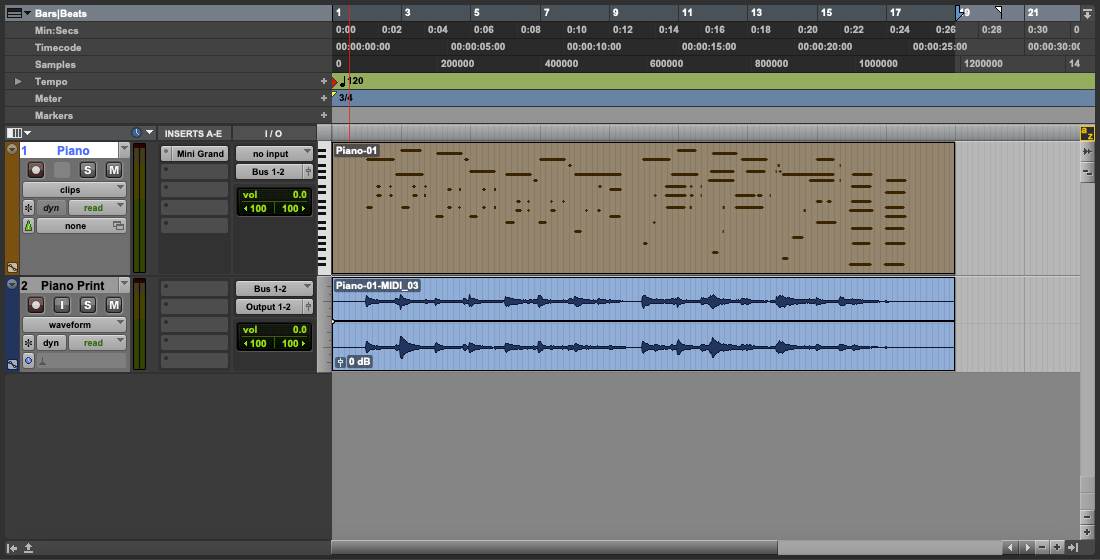 One final method for bouncing MIDI data to an Audio Track is to use Pro Tools’ “Commit” function. One of the benefits of this method is that you don’t have to create any new Audio Tracks yourself—once you select the Commit option, Pro Tools will create a new Audio Track automatically.

First, select all the clips that you want to be rendered into Audio. Then, navigate to Track > Commit, or use the keyboard shortcut Option+Shift+C (Mac) or Alt+Shift+C (Windows). 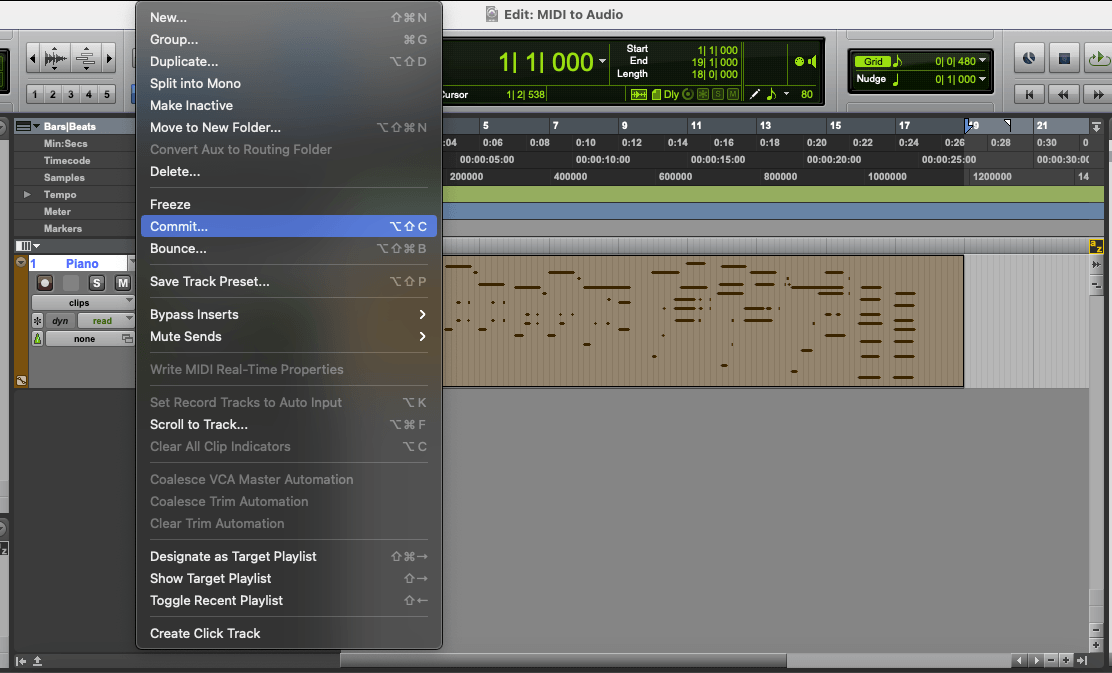 Once selected, the Commit Tracks dialog box will appear, giving you options on what information will be included in the render. You can select or unselect Volume and Mute, Pan, Sends, and Group Assignments. By the Source Tracks option, you can choose what happens to your Source Tracks—Do Nothing, Make Inactive, Hide and Make Inactive, or Delete. 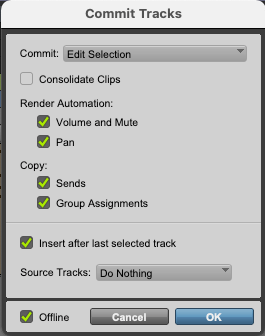 Additionally, you can commit an entire track at once by right-clicking the Track Name, then selecting “Commit” from there. This way, you don’t have to select each clip individually on a track if your goal is to commit the whole thing.

Whether you’re collaborating with other artists, or recording your own material, it’s always a good idea to bounce your MIDI as Audio when you’re finished with a project. You can save yourself a lot of headaches by having the audio files, instead of just relying on the synthesizer to be there. It is the best way to preserve your sound for the future.

Alex ThomenComposer / Arranger / Music Technology Instructor
Alex Thomen is a producer, composer, pianist, mixing engineer, and music educator. He attained his Master's Degree in Commercial Music Composition and Arranging from Belmont University in Nashville, TN and taught as an instructor in Music Production at University of Miami Frost School of Music. From small-scale chamber groups and rock bands to full symphonic orchestra, Thomen arranges, produces, and mixes for a variety of ensembles and styles. Thomen’s education and experience have helped refine his skills in contemporary music production for Film/TV/Games. From ambient, musical soundscapes to fantastical, orchestral pieces, television commercials, and more, Thomen’s creative output evokes a vast variety of moods, settings, and themes.

ProMedia Training is the premier authorized Avid Training Center since 2002, having prepared more students in Pro Tools than any other organization. We teach Pro Tools on all levels as well as offer exam preparation for Pro Tools Certification exams for those studying audio engineering, recording, mixing and related multimedia training for musicians, producers, recording engineers, worship facilities and corporations. ProMedia has been leading the way in short term, Pro Tools Immersion courses which focus in all areas from beginner to advanced Pro Tools Applications.  Our beginners learn the software for music production, recording, editing, audio engineering, and mixing. Our advanced users focus on cutting edge highly complex HDX systems, new concepts as well as workflow improvements. We also provide on-site training for corporations, Universities, Schools, and worship facilities where professionals can advance their skills while learning in their own working environment. ProMedia also participates in many of the musical associations and related organizations related to the recording arts including ASCAP, BMI, NAMM, TAXI A&R, Youth Organizations, NAB, Promo Only, and more.