Music For Television: Step behind the console with Emmy Award winning Music Mixer Peter Baird as he discusses techniques for mixing music for Television, Broadcast, and Post Production.

As the owner of Remote West, Peter Baird has mixed MANY of your favorite TV shows including, Arsenio Hall Show, Lopez Tonight, Grammy Awards Show, Coachella, Tosh.0, Jimmy Kimmel Live, The Price Is Right, Sesame Street, just to name a few. We first met Peter when he came through our advanced ProMedia Pro Tools Training Courses with us recently in Los Angeles in August, 2014. Peter is obviously at the TOP of his game in the TV mixing world, always wanting to stay on the cutting edge of technology with his knowledge. Without further adieu, we’ll let Peter tell you how he works some of his magic in TV and post production. 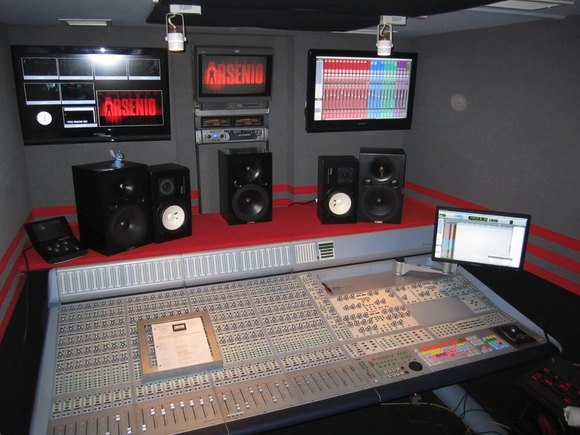 I’ve been in broadcast audio for quite awhile. Back before transmission was all digital, we tended to treat bass the way mastering engineers did vinyl--never let the low end get too big, but try to maintain the illusion that something big was down there. Partially this was due to how easy it was to overload any part of the broadcast chain--a satellite transponder, a microwave link, the preamp stage of the transmitter--and since every part of the chain had limitations and quirks, it was best just to keep the bass under control. Bass overloads usually happened in an average-level rather than peak-level fashion, and the net effect was to crowd out everything else in the mix but the bass, especially since there were limiters protecting the signal at nearly every point in the chain. The other reason to keep the low end under a tight rein was that the prevailing sense from producers was that nobody had a full range system on their home television anyways, which was largely true. I do remember in 1978 hooking up the parent’s big stereo for the first broadcast of Battlestar Galactica, however, thinking it would be a Star Wars-type experience. Alas not.

Digital broadcast has changed a lot of things, and the old attitude toward bass isn’t valid any more. Now, as long as you stay within whatever framework a particular network decrees about loudness (not the same as volume), you can do whatever you like with the mix. And with the penetration of home theater in the general market, there are a surprising number of homes with subwoofers.

So, how to make the Arsenio Hall Show stand out when the Posse or any of the myriad guest artists are pumping? Of course we go to the internet first and see how everyone else does it. Dave Pensado, blessings be upon him, shows a method of thickening up synth bass tracks by duplicating the track with a 330Hz high pass on one track and a 300Hz low pass on the other. The important part of this is that it allows the bass portion of the source to be treated on its own. Dave uses the Waves Air plug and then a compressor set 6:1 with loose attack and release times to really focus the bass.

This approach works extremely well for synths, and with some tweaks can be used with other low-end sources. For the purposes of television, however, I need the focus to be slightly different. First, I want sub-bass information coming from instruments that may not actually have any. Second, I want to optimize the signal to what the home viewer may be listening on. The first item can be accomplished with any bass enhancement plug that uses some kind of synthesis or octave division. The second, however, is a little more subjective.

Since I can’t control how a viewer sets up his subwoofer, I don’t worry too much about it. I set mine with using the Blue Sky test files and a Radio Shack SPL meter, and I set the whole system to -20dbfs=78db at mix position and leave it there. That’s loud enough to make me happy without making me deaf in the process. So far so good, but what about the sub-less rest of the universe? My mini speakers are an ancient pair of NS-10M Studios that have had the drivers replaced many times. Truth be told, I’m not an NS-10 fan. Don’t really love them, never have. But they do have the virtue of telling one what something sounds like on a decent home speaker, albeit one with next to no bass response.

Now if I want to be able to make the subwoofer crank, I need to push subwoofer frequencies, right? But what about the NS-10s? Practically zero of that extra energy will make it to them. So I have two aux sends available to every channel, called Low Booty and High Booty. I twist Low Booty to make the subs thump, and I twist High Booty to wake up the NS-10s. 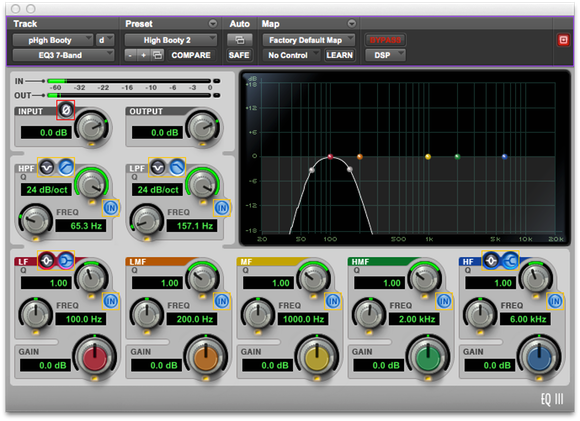 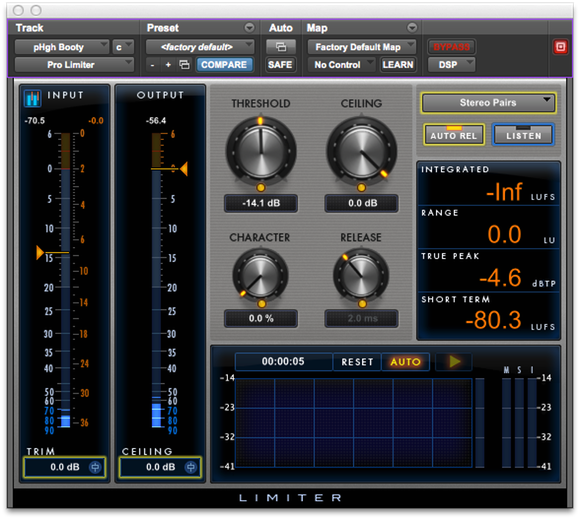 The ProLim is set for Auto Release with the threshold set right down to -15. I then selectively dial in various amounts of each send from the drum buss (both the clean and the parallel return), bass, percussion pads, and anything else that might add to the fun. With the drums at first I experimented with just kick and floor tom going to the Booty busses, but putting the entire kit in there makes really wonderful things happen to the snare, which I did not expect. 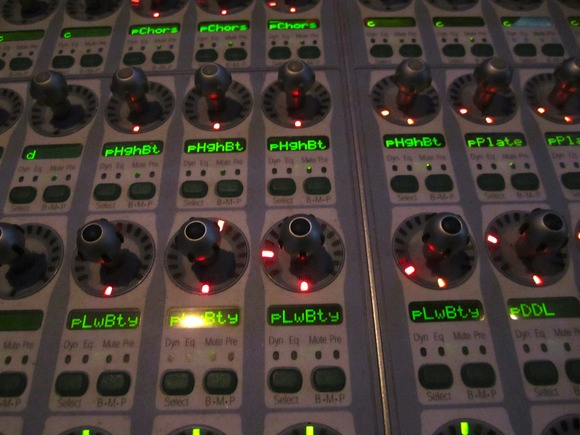 How it looks on the ICON. The small "p" means the send is for the Posse, Arsenio's house band. There are a separate set of Booty sends for the Guest Artists.

The result is two inputs that add bass “feel” to the mix without overpowering it, while at the same time adding insane amounts of sub bass for anyone who likes that stuff.

Peter Baird is an Emmy Award Winning Engineer that has mixed Music, Television, & Film. His career has taken him to every corner of the entertainment universe. His list of mixing credits includes: COPS, Arsenio Hall, George Lopez, Grammy Awards Show, Coachella, Tosh.0, Jimmy Kimmel Live, The Price Is Right, Sesame Street, just to name a few. He is one of a select group of individuals that also has a Remote Broadcast Truck “The Little Red Truck”.

We are lucky enough to have had Peter join us for Pro Tools Training & Certification in our LA Training Center at Promedia Training. Whether you are a beginner just getting into Pro Tools production, or one of the most renowned mix engineers in the world like Peter Baird, we can take your knowledge to the next level with our hands-on Pro Tools Training Courses.