Let's take a step back in time to look at some of the major differences between Analog Tape, and DAW based workflows.

No matter how many new features are introduced into Pro Tools, it's main purpose is to be a Tape Machine. With a few simple clicks you too can know the joy of what it was like to record to tape machines. While there are obvious differences in the recording mediums, tape or hard drive, you can record to Pro Tools the same exact way our studio forefathers did using tape machines. While people on music forums tend to wax poetic about how recording to tape was "better", or how Pro Tools (and other DAW's) can "fix" anything therefore not as valid as the "tape days", these same people overlook the fact that you can record in Pro Tools exactly like we did with tape machines. Let's take a look at some of the setup features necessary to operate in a linear workflow. But first, make sure to ignore the number of tracks you've grown accustomed to seeing. If you really want the tape like experience limit yourself to either 24 or 48 tracks of audio. First letdown, track count.

The main difference when using a tape based recording system (analog or digital) is that we are back a "Linear" workflow. Meaning that if you want to go backward or forward in time you must use the Fast-Forward or Rewind buttons on the Transport Section. You cannot simply click with a mouse on a screen to navigate in time. The linear workflow applies to recording, playback, and mixing as it is not capable of doing things such as selection based record times, loop playback, loop record, playlist recording, and a host of other features we all take for granted. In order for us to use Pro Tools in this manner there are a few things that need to be setup so that it behaves like a tape machine. 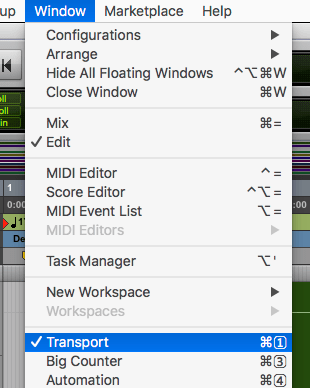 The very first thing we have to familiarize ourselves with is the Transport Window. If you are not currently seeing this window, go the the Window Menu, toward the bottom you will see the option for "Transport" (also Option + 1 numeric keypad). The main part of the Transoport window we will focus on is the standard section which has the Go To Beginning, Rewind, Fast-Forward, Go To End, Stop, Play, and Record buttons (in that exact order from left to right). The clock-like symbol on the far left is the "Online" button which relates to controlling other machines with the Pro Tools transport functions. For ex: If I wanted to control the transport of an analog tape machine with pro tools, the final step in the connection process would be to put the transport "Online" so it knows to send control messages to another machine's transport functions. Will will not need this function, so we'll ignore that button and focus on the main buttons used for navigation. To make it easier on you, Pro Tools allows you to use your Numeric Keypad as a transport controller. The number work as follows:
0 = Play / Stop
1 = Rewind
2 = Fast-Forward
3 = Record
In order to use the Go To Beginning feature, press the Return key on the keyboard. Go To End is activated by pressing Option (Alt) + Return

One last thing that must be active in order to truly act like a tape machine, the Insertion Follows Playback feature must be turned on. The button is located below the Pencil Tool at the top of the Pro Tools Edit Window. The feature is active when the button is turned on (Blue). This will make sure the insertion point in Pro Tools stops in time just a tape would. When you press Play, the tape plays from the point at which the previous playback had been stopped.

Now that these features are active, you can use the transport functions to navigate within your session (tape). One of the main differences to always keep in mind is that unlike "standard" Pro Tools operation the cursor always remains at the original playback/record start point. Whenever you press Stop, the cursor is back it's start point. This is Not the case when using a linear tape system. The cursor will always position itself wherever you pressed Stop. When you press Play, the cursor picks up playback from that position and keeps moving forward. The tape machine does Not rewind back to the original playback position. As we often times need to do exactly this for recording or mixing purposes, you have to use the REW button after ever time you press Play. And wait, wait some more, wait a little longer, now that the playback head is back to where you want to start playback, press Stop, then the Play button to start this process all over again. Each and every time.

In the above example, Playback was started at 0:15, as indicated by the blue Insertion arrow in the Time Ruler at the top. Playback was stopped at 0:50, as shown in the picture below

Notice how the blue Insertion arrow is now at 0:50, meaning this is where your cursor now lives. If you press Play again, it will move forward from this point, not the original playback position.
Welcome to the world of Tape Machines, Cassette Tapes, Hard-Disk Recorders, VHS, Beta, 35mm Film, and a variety of other devices that all operate this way. If you want to get back to the beginning you have to rewind, if you want to move ahead you have to fast-forward. In the picture below, we are using FFW to navigate back to the 0:20 mark to begin playback again.

There is no easy way for me to break this to you, so here goes: You DO NOT have any Undo features with tape. You'll only have the very latest take you've done. You will not be able to do 37 different takes on your vocal run in the 4th chorus. When you record in tape it is always Destructive. It erases whatever was on the track before it records the new take. You CANNOT UNDO this. The information on the tape (hard drive) has permanently changed, you can't disregard this take and oops you way out of this by hitting undo. You will have to make a decision as to what you're happy with and commit to it. To active this function, go to the Operations Menu and select Destructive Record at the very top.

The Record button in the Transport Window will now show you the letter D, for Destructive

Tape machines never had the ability to save multiple takes, or have multiple playlists on the tracks. The physics of how tape work don't allow for something like that to happen. It's electricity of plastic for the love of pete, can't expect too much for 1940's technology. To show how this works with Destructive Record in Pro Tools, think of what happens when you normally record on top of existing audio clips: you wind up with both the original clip, and the newly recorded clip, both accessible in the Clip List. If you recorded a new time in the middle of a previous take, you are also creating an edit while you're recording, which will give you part of the original clip along with the new take, however, both full files are always there, easily gotten from the Clip List, or by using the Trim Tool. 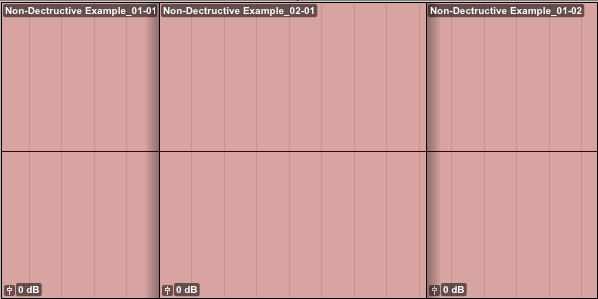 You have the original take, the new take on top of it, access to both is always available.

When you record with Destructive Record, you DO NOT get a new audio file in the Clip List. You still only have 1 audio file, just as we did on tape.

No undo, No alternate take (unless on alternate tracks), No playlist editing, No going back to that take from last November.

A few other things to note about recording is that often times engineers would need to "Punch In" over a certian area of time. This meant having to play a portion of the original recording, then manually trigger Record at the spot where the musician needed to re-play their part. In order to achieve this in Pro Tools you'll want to make sure you select DestructivePunch from the Options menu.

Just as with a tape machine, this give you the ability to selectively go in and out of Record on the audio track as the tape is playing back. This was essentially the only way to record with machines as they did not allow you to make a selection or designate an punch in point as you can with Pro Tools. The triggering of Record had to be done by hand, quickly, as to not mess up the existing material, hence the name Quick Punch.

A few other things to note as you live out your tape machine dreams:
- 24 Tracks (per analog 2" tape) on 1 tape machine.
- 2 analog tape machines could be linked together with timecode and a TimeLine Lynx synchronizer, however, since the timecode needed to be printed on a track on each tape, you wound up being able to use 46 audio tracks instead of 48.
- Each roll of analog 2" tape cost roughly $300-ish, and gave you about 15 worth of recording time.
- Digital Tape is a thing, such as DASH Machines, or the more affordable ADAT series, or Tascam DA series digital recorders. ADAT systems used a SuperVHS, Tascam DA used HI-8, tape to record 8 tracks of audio and multiple machines could be linked together to create a 48 track recording system. This meant 6 individual tapes for a single song! Hooray for documentation.

Another thing to note about functionality is that while you can edit analog tape (a topic all unto itself) by slicing it with a razor blade and taping it back together, all of the editing is done by Shuffling pieces of tape. There is no Slip Mode, Grid, or Spot modes to allow easy editing solutions. There is no Tempo Ruler, Meter Ruler, Bars|Beats Ruler, none of that. Only Time, measured in hours:minutes:seconds:frames (00:00:00:00)
Because there is no way to embed documentation onto the tape, as you can with a Pro Tools session, you will need to refamiliarize yourself with the latest in note taking technology, a notepad.

Your notes will have to stay with the tapes, as well as the track sheets, so you can figure out what's going on next time you put that tape on the machine. This documentation is necessary for archiving as well. Imagine if The Beatles or Hendrix never labled their tapes, or never took notes during their sessions, everyone would be left scratching their head trying to figure out what songs are on what tapes. I personally kept several paper companies in business in the late 90's with the amount of session notes I took.

While this type of Linear Workflow might not be to everone's liking today, a few years ago it was the only way to record. No matter what genre, what instrument, analog or digital tape, tape machine manufactureres, there was essentially a singe way to work with tape machines. Play - Stop - FF - REW