How To Record Synthesizers In Pro Tools

Whether performing live, or recording , a DI box is an essential part of every engineers toolbox. Let’s take a look at how you can use a DI box to record keyboards and synthesizers.

Most of you know DI boxes from their extensive use with electric guitars and bass, however, not everyone knows how often they are used with keyboards and synthesizers. Whether performing live, or working in a studio, DI boxes allow us to connect directly to a pre-amp, just like a microphone. The biggest advantages to this technique is the ability to level match the outputs, remove unwanted noise and distortion, as well as eliminate ground loops. To understand this better, let’s take a look at how all of these components work together.

The purpose of a DI box is to convert a high-impedance, line level, unbalanced audio signal to a low-impedance signal, balanced, microphone level input. This allows you to connect your electric guitar, bass, or synthesizers, directly to the pre-amp, just as you do with a microphone. This is necessary due to the fact that electronic equipment varies in the amount of output it produces. The signal coming out of an electric guitar is not only at a different level than a microphone, it is also well an “unbalanced” audio signal. The biggest problem with unbalanced audio connections is the limited cable lengths due to noise interference once you have cables over 20ft (+/-). Most keyboards and synthesizers also have unbalanced audio outputs, presenting the same problems we have with electric guitars and bass. Although some modern synth’s have a balanced output, it is still a “high-impedance” line level signal which is incompatible with a “low-impedance” pre-amp. Although the signal is balanced, it is incompatible with pre-amps and consoles that don’t have Line Level pre-amps. It is still necessary to use the DI box to convert the signal so it can be fed into the console.

In order to plug the guitar into the pre-amp, we have to convert the audio signal to be the same level as if it were a low-impedance microphone. Furthermore, once the signal has been converted to balanced, you can run much longer cables without adding noise or distortion. This is especially helpful during a live performance as the stage is quite far away from the mixing console.

There are several way a DI can be designed, such as a stand-alone box, or incorporated into a pre-amp. Most people use a stand-alone DI box as it provides to most amount of flexibility. When dealing with a dedicated DI box, there are two types you may encounter, Passive and Active. The primary difference is that Active DI units require power, either from a battery of wall plug. These types of DI units can be very helpful in a Live performance, direct connection to a PA System, or a stage show as they can provide gain and amplification to the signal. A passive DI does Not require any power as it is simply a Transformer that converts the signal. In a studio recording situation, you would connect the output of the DI to your pre-amp (or audio interface w/ pre-amp).

Furthermore, many DI boxes have a “Thru” connection, allowing you to route the signal through the box and feed a traditional Amp. Using this feature is what allows you to record the “clean” audio signal as well as the amped signal simultaneously. The output of the DI box would feed your pre-amp, while the thru signal feeds an amp cabinet, which is then recorded using a microphone. 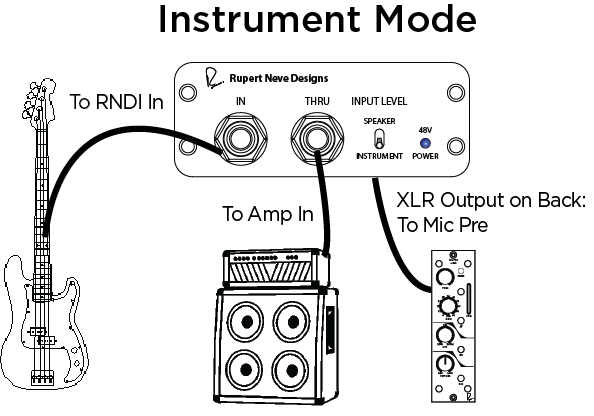 This technique is very helpful in a production situation as it opens up the sonic possibilities of using various pre-amps and other equipment for tone and flavor. People favor certain pre-amps for their sonic qualities, and will debate which one is better to use with a microphone. The same mentality now applies to your synthesizers. You can use your nice, expensive, equipment to enhance to sonic qualities of your synthesizers. The difference in sonic texture can be astronomically different depending on what brand of pre-amp you decide to use. Furthermore, you can also use other studio processors such as eq & compression, to custom tailor the sound to your liking, just as you would with any microphone.