Meet the the Rupert Neve Designs RMP-D8 pre-amp. A Dante Audio enabled powerhouse that works in recording studios as well as Live Sound

As many people in the audio world can attest, the name Rupert Neve is synonymous with quality. There are no words to describe how deep his impact in the professional audio industry goes. With that legacy, when a new product is released many people pay attention. Such is the case with the latest pre-amp offering from the company based just outside of Austin, TX. Not only is the RMP-D8 on par with all the greatest Neve pre-amps, it brings to life a whole new dimension of capabilities as it incorporates full A/D conversion, as well as Dante Network Audio capabilities. This range of features makes is a powerhouse for studio applications, live-sound and touring, as well as installed sound, such as theaters. The ability to send audio over network cable (cat5e / cat6 RJ45) provides a dimension of flexible routing options to any audio environment, as well as bringing the traditional Neve sound into the 21st century.

First off, let's get to the good stuff: The RMP-D8 is an 8-channel pre-amp, with built-in 24-bit, 192kHz A/D converters, as well as Dante Network Audio, and redundant (2) power supplies.  Each of the channels of the unit is a full Class-A pre-amp, feeding a custom designed transformer. It the equivalent of having 8 physically independent pre-amps, no internal gain summing in this box. The internal A/D converters are a thing on beauty. There are a result of years of testing and designs to make sure they stay true to the Neve sound.

The unit has a very clean, well thought-out layout, making it very easy to navigate and make adjustments. It has the ability to be controlled via remote software from a Mac/PC using the software found on the company website. The software connects to the hardware via ethernet cable (cat5e / cat6), either directly, or through a network switch.
Each channel is selectable between Mic / Line, +48V phantom power per channel, Hi-Pass Filter, phase inverse, and a -10dB pad setting. Each pre-amp channels has 60dB of gain in 1dB steps, which allows for extreme precision when dialing in settings. As an example, the Rupert Neve 5052 Shelford pre-amp moves in 6dB steps.

On the back of the unit you're find the typical XLR/TRS combo jacks on the input side, as well as AES/EBU digital output, allowing you to connect directly to the digital input on an audio interface or console. The unit also has dual power connections to make sure you have constant uptime during live shows, or recording. 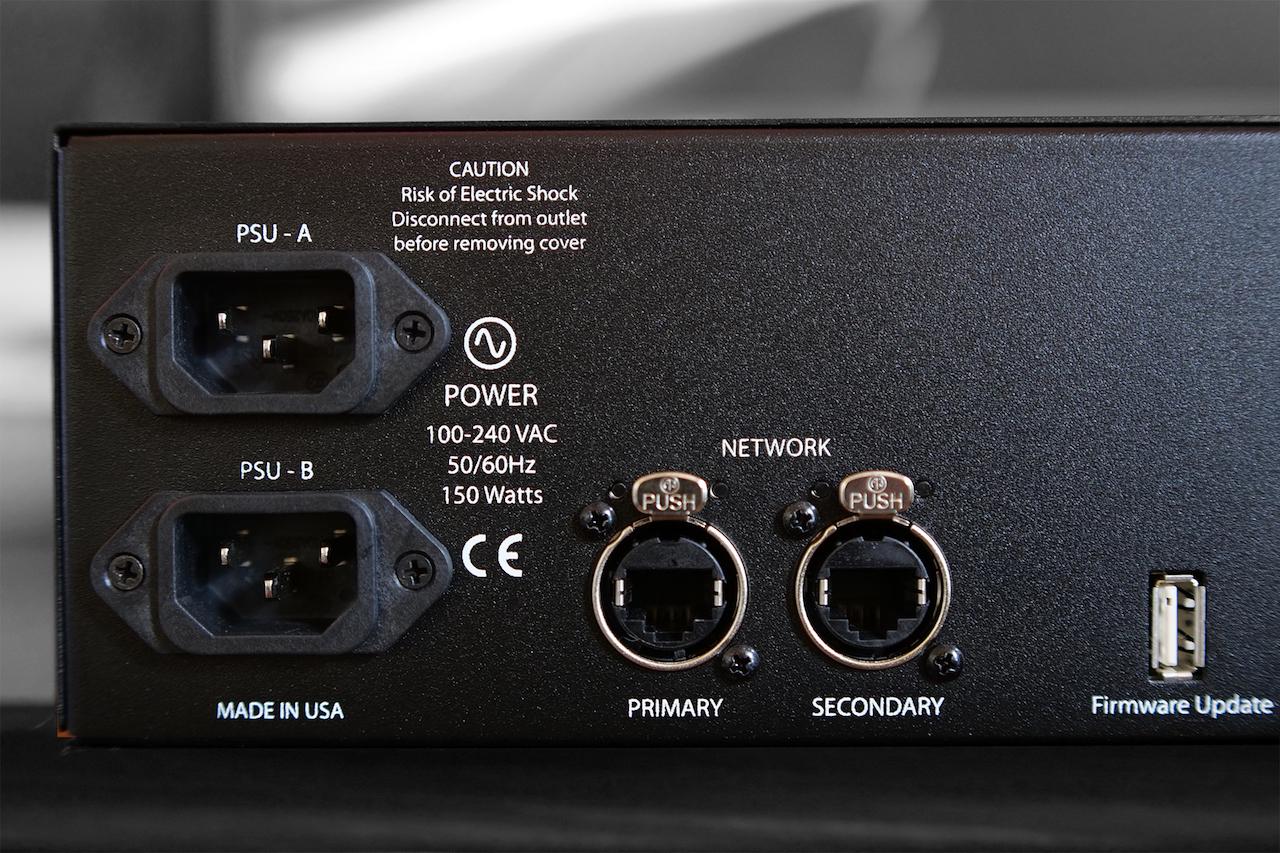 Along with the redundant power supply, you'll also find a USB port which allows any future firmware updates to the unit, as well as Dante Network Audio connection. You also have a secondary connection as a backup. This unit was well thought out to account for any possible issues audio engineers might face while they're working. I can personally attest to having cables pulled, or go bad, while we were recording. Fun times were not had that day.
The Dante port is where the real power of this unit comes into focus as it allows for full integration, and audio input, into your existing Dante Audio structure. This also assumes they you know what Dante Audio is, so let's back up for a bit and explain what's going on here.

Dante is a multimedia networking solution developed by Audinate, and supported by the pro-audio industry. It allows for audio, control, and other data, to travel along standard ethernet networks and cables. With near-zero latency, and perfect synchronization, it allows multiple audio streams to flow through a network, instead of over bulky copper cables and connectors. It is used in Live Sound productions, Broadcast, Installed sound, as well as Recording Studio applications. Just as with standard analog cables, it is a means of connecting outputs of one device, to the inputs of another device. Signal Flow is the backbone of all things audio.
Since the audio signal flows over network cables, a managed Switch can be used to allow for flexible routing solutions between Dante devices on the network. In order to test out this new Neve pre-amp, we had to connect it to a Dante network, as well as having a Dante capable audio interface to act as the receiver. To accomplish this we used a Cisco SG-300 Network Switch, and a Focusrite Red 4Pre audio interface connected to Pro Tools software via Thunderbolt connection.

We started off by connecting all the devices to our network switch. The Mac computer, Red 4Pre, RMP-D8, were all connected via ethernet cables. Also, the audio interface (Red 4Pre) was connected to our computer via Thunderbolt cable. This unit will act as our main input / output path into Pro Tools. Along with the 8 analog inputs/outputs, the unit has a Dante port which can accommodate up to 64 audio channels. This will allow us to route the audio signal from the Neve pre-amp, through the focusrite, into Pro Tools for recording. Yay! Technology! 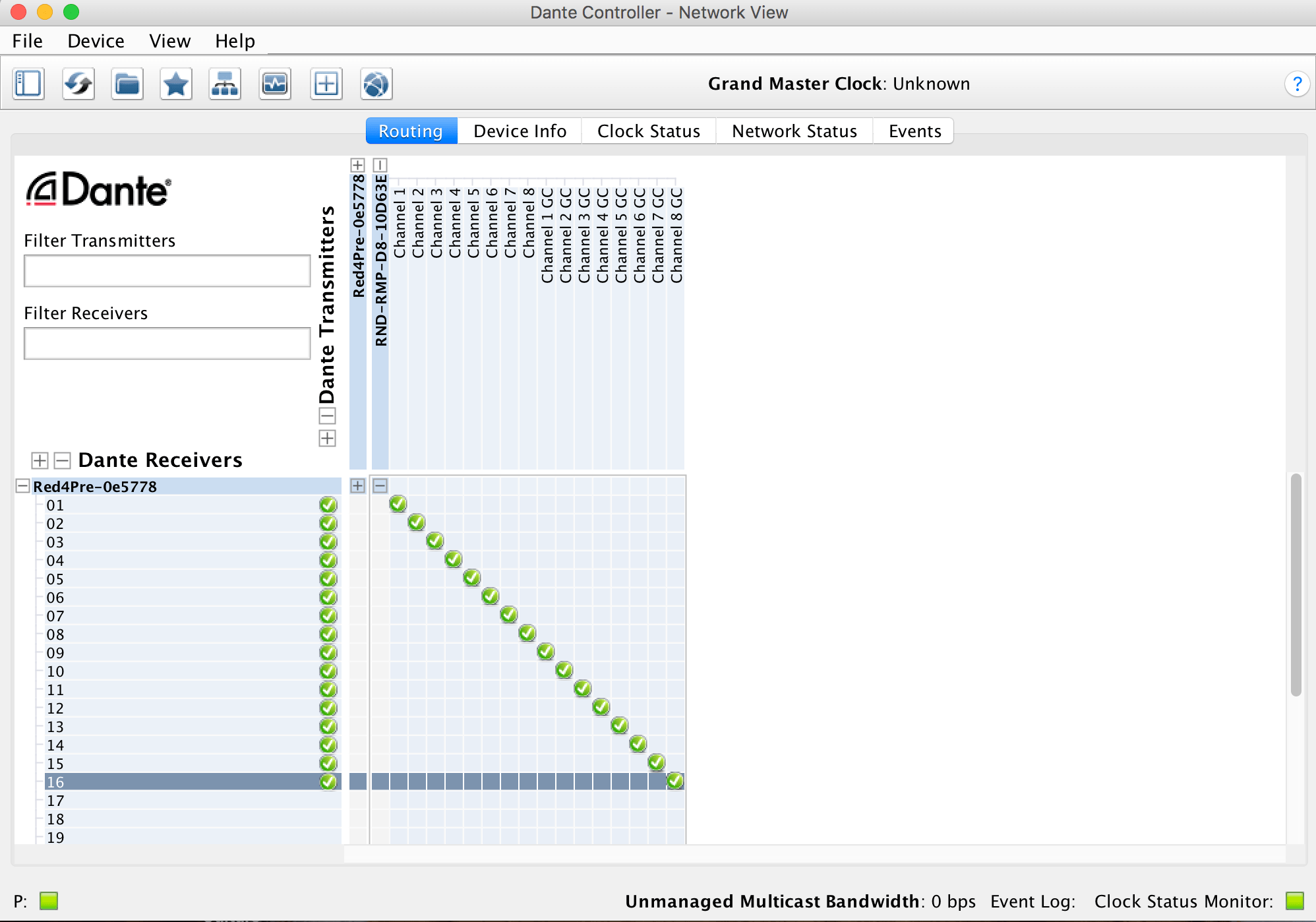 Once we had the units connected, we used the Dante Controller software (available from Audinate.com) to patch the outputs of the RMP-D8 to the input paths of the Red 4Pre. One of the best things we discovered abour the RMP-D8 pre-amp is that is actually had 16 outputs when connected via Dante. Outputs 9 - 16 are an exact mirror of 1 - 8, but at -6dB lower. This allows for simultaneous recroding of a safety signal with more headroom. Stop right there and take my money, now! This feature is invaluable as it allows for redundant safety recording paths with no extra work. 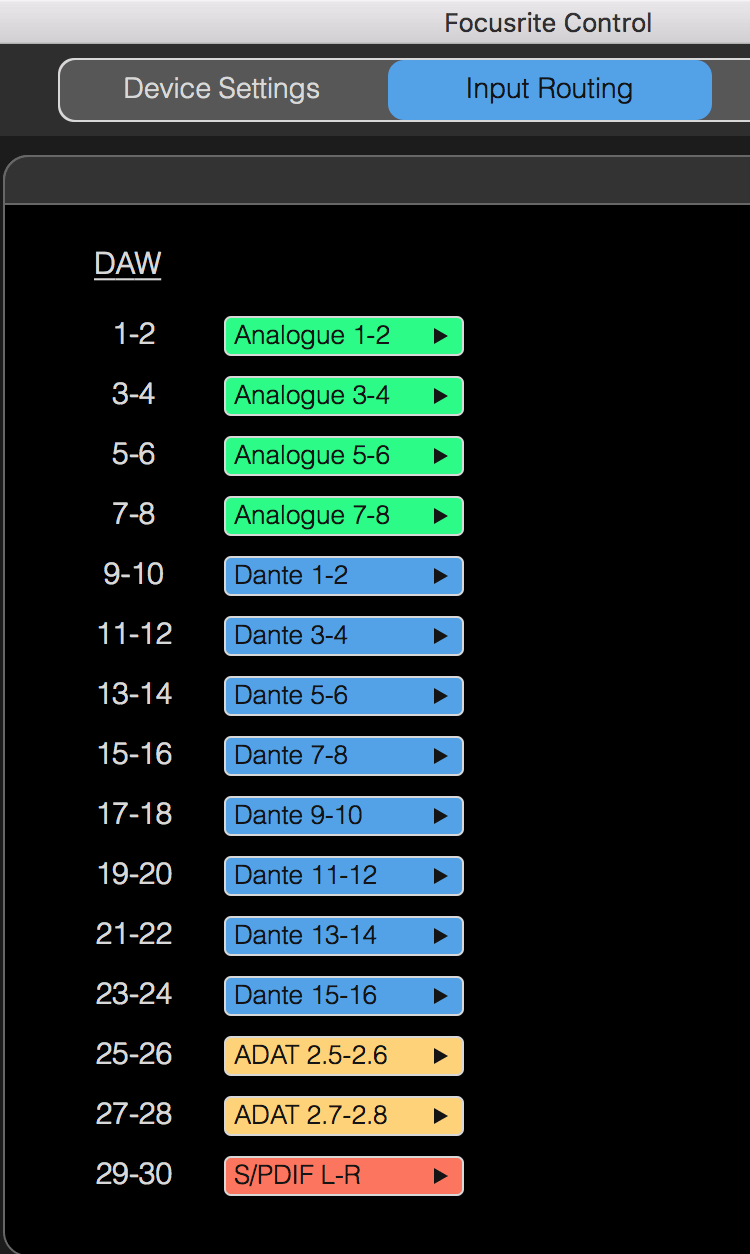 Now that the audio paths have been mapped to Dante, we used the Focusrite Control software (available with focusrite products) to map the Dante audio inputs, as well as the built in Analog input paths. This mapping will determine how the Pro Tools I/O setting will communicate with the audio interface. In our test, channels 1 - 8 are the built-in analog inputs of the interface, and channels 9 - 24 are the 16 channels being fed by the Rupert Neve Designs RMP-D8 pre-amp. Channels 9 - 16 correspond to channels 1 - 8 on the pre-amp. Channels 17 - 24 correspond to channels 9 - 16 on the pre-amp (-6dB lower signal) 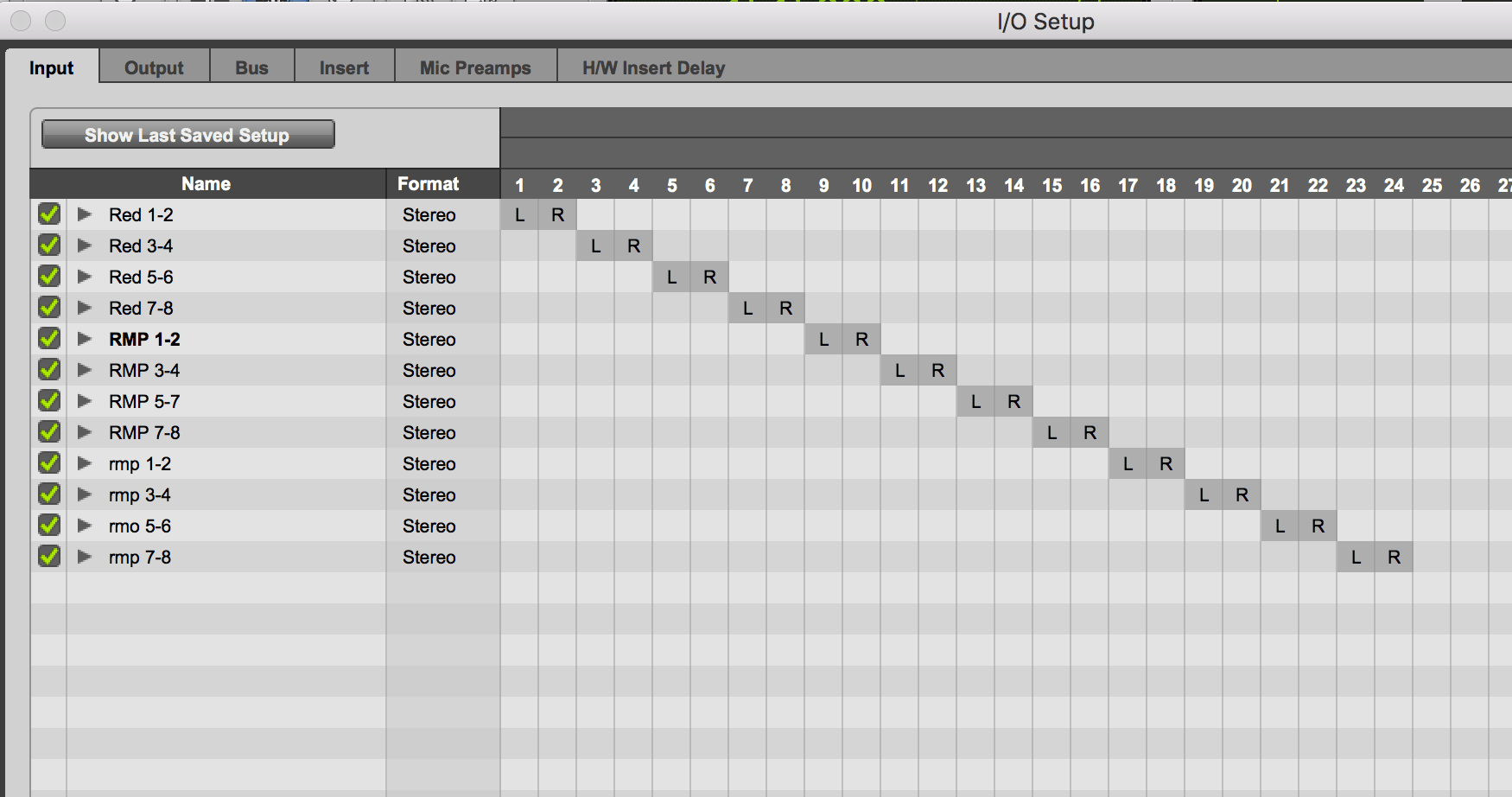 Once we launched Pro Tools, we went to the I/O Setup menu to check our configuration. 24 Inputs, with 8 via the Red 4Pre, and another 16 inputs via the Red 4Pre via Dante, from the RMP-D8. Like Magic! This allowed us to set up 16 audio-tracks to record the inputs from the RMP-D8, channels 1 - 8, and 9 - 16 at -6dB lower signal level.

After spending a few days with the unit, we realized it was not nearly enough time and we wanted more. They had to pry the unit from our greedy fingers once our test was complete. To say "It sound like a Neve" is an understatement. It sounds incredible! Everything we tried running through it, tube microphones, classics, modern, sure sm57's, everything sounded fantastic. There are no surprises along the way. However, the Dante capabilities of this unit put it over-the-top. It is remarkably versatile in all application settings. So much so that the new Dream Theatre album was recored using these pre-amps, as well as taking them on tour. Check out the article with James Meslin talking about the album.

If you're interested in learning more about the units, as well as purchasing options please contact us at: This email address is being protected from spambots. You need JavaScript enabled to view it. / 323-810-5272